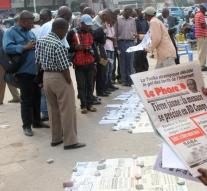 - The DRC has almost no vaccine to vaccinate more people preventively against yellow fever. That's what officials said health care.

The country stated just this week officially that Congo is due to a yellow fever epidemic. The disease is made up of a virus that is transmitted by mosquitoes. Almost a third of the people who become infected eventually dies. About 2 million Congolese have received the vaccine, especially in Kinshasa. only 12 million people live in that city.

Up to now, have been established in Congo 67 cases of yellow fever. Five people have succumbed. More than one thousand people are being monitored because they exhibit symptoms of the disease.