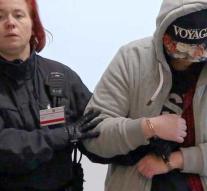 dresden - The Dresden district court imposed long prison sentences on Wednesday in the trial against the members of the right-wing extremist Freital group.

The seven indicted men and a woman go to prison for four to ten years because of the formation of a terrorist organization and attempted murder or complicity.

The gang of eight had to answer for a total of five bombings in 2015 in Freital and Dresden. Reception centers for refugees were the target, but also political opponents. The car of a local councilor of Die Linke was blown up and the office of that party also had to pay it.

The bombs were made with heavy fireworks from the Czech Republic that is banned in Germany. According to the public prosecutor, it is a miracle that no victims have fallen.

The judge sentenced the leaders Timo S. and Patrick F. to ten years respectively nine years and six months. At the time of the terrorist attacks, eighteen-year-old Justin S., who made a comprehensive statement about the working methods of the group, was given four years of juvenile detention. The only woman in the company, Maria K., is behind bars for five and a half years.