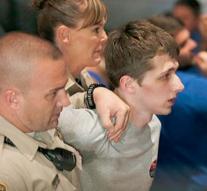 - British man last June in an election meeting of Donald Trump tried to grab the gun of a police officer, was sentenced to one year prison. The 20-year-old Michael Sandford later explained that he wanted to murder the Republican presidential candidate during the rally in a casino in Las Vegas.

Before he went to the meeting in the gambling city in the Treasure Island Casino, which was attended by thousands of supporters Trump, he first went to a shooting range to practice.

Sandford went according to police reports at the meeting on a cop out for a chat and told to go get an autograph from Trump. Then he would have to try to pull the service weapon of the agent out of the holster.

No shots were fired.