Home / World / Yasser Arafat has his own museum 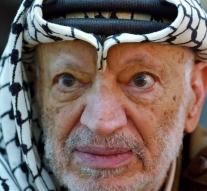 ramallah - Exactly twelve years a museum after his death in honor of Palestinian leader Yasser Arafat opened in Ramallah on the West Bank. In this complex Arafat spent much time the last years of his life.

The design of the memorial monument took converted 6.5 million and years of time. The museum shows how modest was Arafat's personal life. His stays were small and austere. His few belongings were also seen. The remainder of the museum presents a century Palestinian history. Which Palestinians call the Nakba, the catastrophe. This is actually referred to the period after the creation of Israel in 1948.

The museum is just a few steps away from the mausoleum where Yasser Arafat's body lies. The leader of the PLO died on November 11, 2004, at the age of 75.