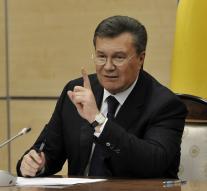 - In February 2014 , the deposed president of Ukraine Viktor Yanukovych get to the European Court of Human Rights. Janoekovtisj (65) argues that his right to a fair trial in his own country has been violated , reports Ukrainian news agency Interfax . According to him , Ukraine has also failed to investigate several attacks on his life and he is discriminated against on the basis of political affiliation .

The lawyers of Yanukovich claim that the Ukrainian courts are not independent.

The current government in Kiev has accused the pro-Russian politician including from mass murder and abuse of power. For that reason, there is a search warrant and Yanukovych fled his country.