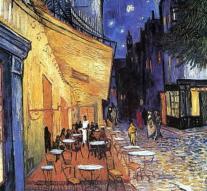 - Students of Yale University can breathe a sigh of relief, their Van Gogh remains their Van Gogh. The Court of Appeals of New York ruled Tuesday that the institution is the rightful owner of the painting " The night café. A great-grandson of a Russian collector said he was entitled to the painted by Vincent van Gogh painting in 1881, but the New York judge disagreed.

The painting once belonged to the Russian collector Ivan Morozov Abramovich, after which it passed to the Russian state and a gallery in France before the American Stephen Carlton Clark donated to the art collection of Yale.

Pierre Konowaloff, great-grandson of Morozov, found that the painting was wrongly annexed by the Russian state and wanted through the courts to get the cloth back into the family. That did not happen .