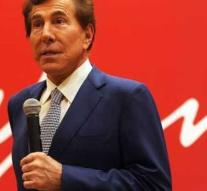 las vegas - The casino company Wynn Resorts is starting an investigation into founder and director Steve Wynn, who for years would have sexually intimidated women. To this end, the Board of Directors has set up a special committee in response to an article in the Wall Street Journal, which reported in detail about its alleged misdeeds.

The newspaper spoke to more than 150 former employees. They claimed that Wynn forced masseuses, among other things, to perform sexual acts. The 76-year-old Wynn contradicts the accusations. The issue did ensure that the share of Wynn Resorts had to surrender more than 10 percent of market value.