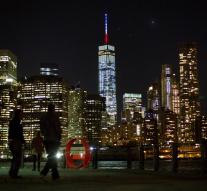 - The new World Trade Center in New York on Friday to show his sympathy for Paris. The top of the skyscraper was illuminated in the colors of the French flag : blue, white and red. In the coming days the tower colors.

The Governor of the State of New York, Andrew Cuomo, has commissioned the lighting of the World Trade Center. " We stand in solemn solidarity with the French people, as they have done for us in our times of tragedy ", he said. One World Trade Center was opened a year ago. On the site stood until September 11 2001, the Twin Towers.