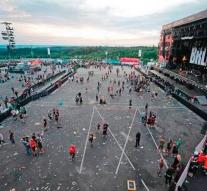 berlin - A writer-out of two names of staff has caused the terrorist alarm and the subsequent evacuation of the German pop festival Rock am Ring. That reported German media Wednesday. About 87,000 people had to finish the festival ground in the Eifel on Friday 2 June, and the event was interrupted.

The names of two employees were incorrectly written by a hired company that helped build the festival. When those names did not match an official list of the organizer of the festival, an alarm was struck. The Ministry of the Interior of the Land of Rhineland-Palatinate even stated that there were ties with salafic circles.

The German police say they want to learn from the mistake and will also volunteer to check construction workers. Now only the security officers were screened.

Rock am Ring continued the day after the evacuation.