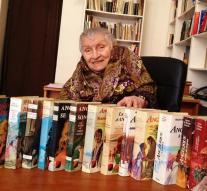 paris - French writer Anne Golon, known for the historic series Angélique, died in Versailles at the age of 95 on Friday. Her books are translated into thirty languages, worldwide they sold millions of books. Angelique takes place in the seventeenth century. In the end, about thirteen parts have been published.

Her castle romans were also filmed frequently. To the taste of Golon, all of these were unsuccessful versions. Anne Golon wrote the books together with her husband Serge. Golon was a pseudonym, their real name was Goloubinoff.

In the Netherlands, Angélique was broadcast on television in the sixties.