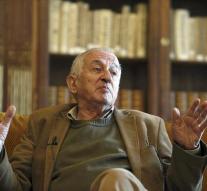 marrakech - The repeatedly renowned Spanish writer Juan Goytisolo died in his hometown of Marrakech in Morocco on Sunday. He was 86 years old.

The Goytisolo born in a wealthy family in Barcelona was for years a candidate for the Nobel Prize. In 2014, he received the prestigious Cervant Prize in his native country. According to the jury chairman, he represented the summit of Spanish literature, especially in the post-war era.

The Catalan was commuting between the western and the Arab world. He grew up in Barcelona and became a furious opponent of the Francisco Franco regime in 1956 in self-proclaimed exile in Paris. In Spain, his work was banned from 1963 until the death of the dictator in 1975.

Goytisolo's most famous works include Rouw in paradise, the trilogy The Identity, The Revenge of Don Julián and Juan Sin Tierra (Jan without Country). In his books the writer finished the backdrop of Spanish society during the dictatorship, but in his later works he did not save modern Spain either.