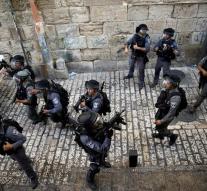 tel aviv - After a careful restoration of peace on Jerusalem's Temple Mount, there are still collisions between the Israeli police and Palestinians on Thursday. According to the relief organization Red Half Moon, fifty were injured by rubber bullets and tear gas. The agents would also have used the weapon.

Thousands of Muslims stepped up and around the Temple Mount to pray in the al-Aqsa Mosque. The holy places were released again after the Israeli security service had taken the controversial metal detectors.

In recent days there were massive incidents with the dead and wounded in the Old City and beyond. The Israeli authorities sharpened the security measures after the death of two police officers on the Temple Mount on July 14.