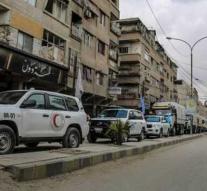 beirut - Sick and wounded civilians have left the Syrian rebel enclave East Ghouta. An official from the rebel group Jaish al-Islam said that patients could leave Tuesday after an agreement was reached about a medical evacuation. They would be on a UN list with about a thousand people who urgently need medical help.

Syrian state media reports that the first group consisted of about 35 people. Other evacuees followed later. They are transferred to a reception location at the capital Damascus. A witness told the Reuters news agency that dozens of people left the area through the al-Wafideen transition. Among others, they were women who were carrying young children and men on crutches.

Since the start of an offensive in mid-February by the Syrian army, more than 1100 civilians have been killed. The army holds more than half of the area and splits the enclave. In the meantime, families are sleeping in the open air in the largest city in the area, Douma. There is no place in shelters anymore.

The UN Security Council has previously demanded a truce of thirty days. However, Damascus and Moscow argue that the ceasefire does not apply to terrorist organizations in East Ghouta that are bombarding the nearby capital with mortar grenades.

An evacuation would also have started at another location near Damascus. Rebels in al-Qadam, which lies south of the capital, would have left for Idlib. Military Media, which is affiliated with Hezbollah, reported that about three hundred fighters from Ajnad al-Sham and their families left the area by bus.