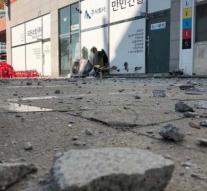 pohang - At least twenty people were injured by an earthquake Sunday in the city of Pohang in south-eastern South Korea. The South Korean news agency Yonhap reported that the quake had a force of 4.6.

The quake was felt in large parts of the country. People also reacted in the capital Seoul. Around 1400 people called to the fire department in Seoul with questions and remarks about the quake.

Pohang is about 180 kilometers from Pyeongchang, where the Olympic Games are held.