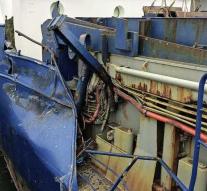 rugen - By a collision between two ships east of the German island of Rügen, Tuesday 15 people were injured, ten of them seriously. The victims were on a ship that was on its way to a...

It involves 10 technicians from the platform and four crew members from the Danish ship World Bora. The other vessel concerned the Raba flying the Cypriot flag. The crew of this remained unharmed.

The cause of the collision is not clear, according to the police. Both ships have been brought to the port of the island of Rügen.