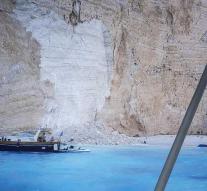 athens - Several people were injured by a landslide at a popular beach on the Greek island of Zakynthos. The Greek broadcaster ERT reports that high waves arose due to the avalanche. As a result, boats with holidaymakers would also have been added.

Images of the incident are circulating in Greek media. You can see how a part of a rock wall lets go and falls down. Beach guests are on the run in panic. As far as we know, no one got buried, but the authorities are looking for dogs on the beach as a precaution.

Local officials say that at least seven people have been injured. Most victims would only have suffered minor injuries.

The Navagio beach is a popular attraction on the island, partly because of the presence of a shipwreck. The beach is surrounded by high cliffs and can only be reached by boat.