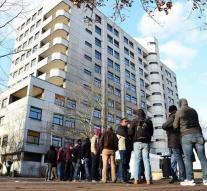 bremen - At a large fire in a refugee refugee center in the center of Bremen there were 37 injured in the night of Saturday on Sunday. Four adults and ten children had to be admitted to hospital.

The fire has broken out into the basement of five floors. The cause is not yet known according to the fire department. When the fire brigade arrived, there were already a lot of residents in panic for windows, German media reported.

There has been a great deal of fire in recent years in asylum seekers centers or properties intended for this purpose.