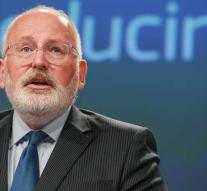 strasbourg - Of the 72 judges of the Polish Supreme Court, there will be a threat of 27 forced pensions in three weeks. Frans Timmermans is very worried about this and is going to Warsaw again on Monday to discuss the rule of law with the government. According to the Vice-President of the European Commission, he is in serious danger.

Timmermans started the heaviest instrument in December (Article 7), which meant that Poland could lose its voting rights in the EU. In recent months, the nationalist government has made some concessions, but important problems are still unresolved, said the Dutchman in the European Parliament.