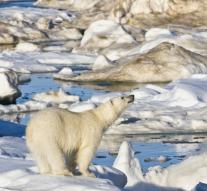 moscow - The World Wildlife Fund has Friday by the Russian authorities are urged to better protect its workers in the polar regions. Following an incident in which a Russian Wrangel Island fireworks threw a polar bear to scare the animal. The bear thought that food was thrown and picked up the firecracker on. Immediately after the fireworks exploded in the mouth of the animal, which was seriously injured.

Russians who work in the polar regions have to make frequent pacing. The population in Russia is estimated at 5000 to 7000. The WWF wants the workers carry food remnants not to animals and that their employers provide good protection, including alarm systems. That way animals do not need to be chased with fireworks, writes The Moscow Times.

The Russian authorities have not yet responded to the request of the Fund. However Minister Sergei Donskoi, in charge of natural things already ordered an investigation following the incident with the injured bear.