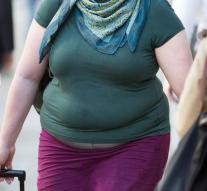 - For the first time in history, we have more overweight than underweight people around. Nearly two billion people are overweight, nearly 30 percent of the world population. The World Health Organization says that 600 million people of that group suffering from real obesity.

The children's rights organization Save the Children announced Tuesday in Berlin that the past quarter century, the number of malnourished children by more than one-third decreased. Even so, there are still 159 million children worldwide get around that insufficient food. The organization believes that the next fifteen years that number will decline only slowly to 129 million children.