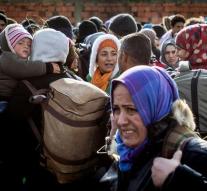 geneve - The world is heading this year at a new record refugees. The global number of refugees reached in mid-2015 a total of 20.2 million people. This was reported by UN refugee agency UNHCR on Friday in a biannual report.

This is the first time since 1992 that the number exceeds 20 million. The number of displaced civilians in their own country increased by 2 million to an estimated 34 million, according to the report. This figure only included IDPs which currently supports the UNHCR. The current total number of IDPs will only be known by mid-2016.

Based on these figures, it is feared that in 2015 for the first time more than 60 million people worldwide are on the run. That means that 1 in 122 people in the world is a refugee or asylum seeker, or in their own home on the run.

Flight and expulsion characterize our time, said the outgoing UN High Commissioner for Refugees António Guterres.It was never more important than now to show tolerance, compassion and solidarity with those who have lost everything.