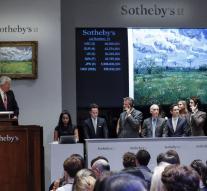 - A painting by Vincent van Gogh (1853-1890) was Thursday in New York for 54 million dollars (almost 50 million) went under the hammer. On the canvas ' Paysage sous un ciel mouvementé ' shows a landscape under a dark cloudy sky.

Prior to the auction at Sotheby's had estimated that the canvas from 1889 would change between 50 and $ 70 million of owner. It is still unclear who the buyer is. Van Gogh, the highest price for a painting has been paid in 1990. His portrait of Dr. Gachet in 1890 resulted in 82.5 million dollars then on.