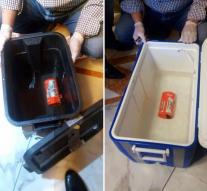 - On the cockpit voice recorder of May in the Mediterranean paid airliner EgyptAir is to hear the word 'fire'. This has informed the Egyptian inquiry Saturday.

The audio recordings are consistent with the data on the flightcorder, indicating that there was smoke in the toilet and electronics section behind the cockpit. On the wreckage of the front part of the aircraft have also been found soot and traces of excessive heat.

The Airbus A320 disappeared on May 19 during a flight from Paris to Cairo. All 66 occupants of flight MS804 died. The pilots reported to air traffic controllers nothing about problems, but the sound recordings indicate that the crew tried to extinguish a fire before it crashed device.


The inquiry said Saturday it could not be determined where and through which the fire started.