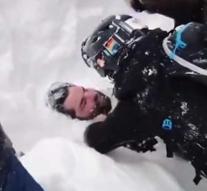 squaw valley - A rescue worker filmed a special moment in the California ski resort Squaw Valley. A man who was buried under an avalanche is recovered and excavated by bystanders and a rushed rescue team.

In the Californian ski resort five snowboarders were buried under the snow. Thanks to the rapid action of a rescue team and the help of other winter sports people in the area, all five of them could be found on time. A rescue worker captured the moment with his camera.

One of the five snowboarders was seriously injured. The four others came off unscathed.

Almost two meters of snow fell in the ski resort in the north of the US state of California. In the Mammoth Mountain ski area, 250 kilometers southeast of Squaw Valley, three people were already surprised by an avalanche. They too have all been saved.