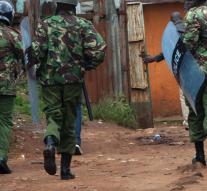 - "Three women in Kenya killed in an attack on a police station in the port city of Mombasa. The trio would Sunday with concealed weapons building entered, reported the Kenyan newspaper The Star."

"The women, who wore Islamic garb, walked into the office and said they wanted to report a crime. One of the women would then suddenly stabbed a policeman with a knife. It would also be a petrol bomb thrown, causing fire broke out."

"The police, according to the newspaper still looking for two male accomplices allegedly fled. It is still unclear who is responsible for the attack."