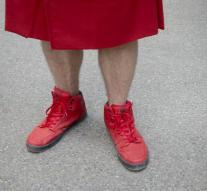 jakarta - Male activist group New Men's Alliance protests in Indonesia against the way their own sex on women think and treat them. The group was created to make men aware of their ideas about women. And as the adage all too often is that women in miniskirt ask to be raped, the men wear a miniskirt during their protests.

Because it seems to be increasing violence in Indonesia. Figures from the National Committee of violence against women show that there were more than 300 000 cases reported in 2015 of domestic and / or sexual violence against more than 100 000 in 2010.

Violence against women was also in Indonesia earlier this year again in the news when a schoolgirl was killed after a gang rape. The government then came up with harsher punishments, such as chemical castration and the death penalty. But in July, a study that 90 percent of women in Indonesia do not report on sexual violence. The stigma surrounding violence against women want the action group New Men's Alliance with their actions to an end.