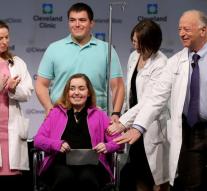 cleveland - The first uterus transplant ever has failed in the United States. A hospital in the state of Ohio announced Wednesday that the body of patient Lindsey had to be removed after complications. What exactly went wrong, did the hospital not (yet) known.

Lindsey (26), who was born without a uterus, the end of February during nine hours went under the knife. Monday, she spoke out still hoping to get pregnant next year. She incidentally already has three adopted sons. 'Unfortunately, the operation was not a success,' she said in a statement. 'Still, it goes well with me and I have a lot of support from my area. '

In the Cleveland Clinic in the coming months are performed in a total of ten uterus transplants. The clinic has selected a total of 250 candidates. Surgeons work closely with doctors in Sweden, where his five children born since 2014 among mothers with a transplanted womb.