Home / World / Woman with fake her pregnancy accused of terrorism 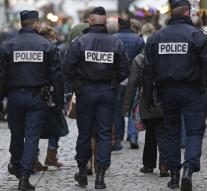 - A young woman who had a fake her pregnancy at home, Thursday accused the South of France Montpellier terrorism, French media reported. The 23-year-old converted to Islam Camille emerged during an investigation of a terrorist threat have to fake her pregnancy to anyone's suggestion might appear to be pregnant.

The police suspect her of the 'belly' with explosives to want to fill (to) commit an act of an attack. The veiled from head to toe Camille has married a Frenchman of Chadian descent also known as terror suspect was arrested.

The woman stated that the 'belly' is for shoplifting and not for terrorism, but the police do not believe. Camille has recently received a substantial inheritance. She has no financial problems requiring shoplifting. She even donated money to Islamic radicals. In addition, she has shown enormous interest in the internet for propaganda Islamic State of female suicide bombers and jihad in Syria.