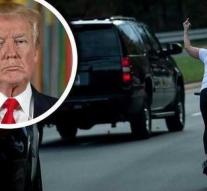 washington - July Briskman became world famous at the end of last year when she unequivocally expressed her feelings for US President Donald Trump. As the presidential convoy drove past, the 50-year-old lady stuck up her middle finger while cycling. The gesture took July her job, but she did not let that happen without a struggle.

On 28 October 2017, Trump drove back to the White House after a game of golf in Sterling (Virginia). The secure presidential column passed the cycling Juli Briskman, who made her feelings clear to the American head of government at that moment by raising her middle finger. 'I thought,' Really, are you playing golf again? 'I thought of the destruction by the hurricane in Puerto Rico, the children who were expelled, the reactions to the Las Vegas shooting... And then I could not restrain myself', stated earlier.