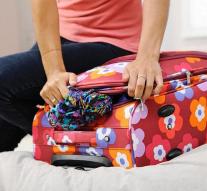 madrid - Spanish police have arrested at the Madrid airport a 29-year-old Dutch woman who carried four shoes in her suitcase a total of 180,000 euros. The Spanish newspaper El Pais reported Friday that the woman had stepped in Brussels at the airport and was on his way to the Colombian city of Medellin.

During a stop on the Madrid-Barajas airport the woman caught the attention of the police. In her case the police found four shoes. In each sole was blocked for 45 000 euro to 500 euro notes.

Police are investigating whether the woman was on her way to Colombia with drug money is laundered. Furthermore, she had in her purse nearly 6000 euros.