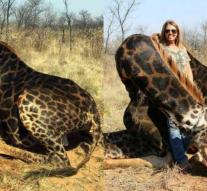 johannesburg - An American 'trophy hunter' goes viral on social media after she places photos of a giraffe shot on social media, accompanied by commentary that makes nature conservation fierce.

Tessa Thompson Talley, a blonde with shiny sunglasses, has shared photos of several animals shot in South Africa, including an antelope. One photo led to a great commotion. 'This is a dream come true. Once in a lifetime. I saw this rare black giraffe, a male, and stalked it for a while. I knew: this is it. He was 18 years old, weighing almost two thousand kilos and I am blessed to get about 900 kilos of meat from him. '

Conservationists shared the picture and Talley soon went viral. 'White American primitives, partly descendants of a neanderthal, come to Africa and shoot a rare giraffe to death, thanks to South African stupidity,' wrote AfricaDigest. 'If the government does not protect our nature, we have to do it ourselves. Her name is Tessa Thompson Talley. Share this. '

Talley got dozens of angry comments and has now protected her social media accounts, and removed the offending photo. Her name now roams the Internet everywhere as a model of the disrespect with which foreigners look at the natural beauty on the African continent, in the eyes of the local population.