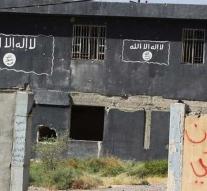 bagdad/amman - An Iraqi court sentenced a woman to death and eleven others to life imprisonment for terrorism and membership of the Islamic State (IS) terrorist movement. The woman sentenced to death is a Turkish. Except for one, a woman from Azerbaijan, all convicts are Turkish, reported the news channel al-Jazeera.

The death penalty is executed by hanging. However, it is still possible to appeal, the judge said. The women are between twenty and fifty years old and according to defenders would have been misled by their husbands. According to al-Jazeera, it is about twelve widows of IS fighters. They were arrested in the city of Mosul and the western Tel Afar.

IS is a group of Sunni extremists with roots in western Iraq. IS elaborated on other groups of jihadists and first appeared as Islamic State in Iraq and the Levant four years ago.

The movement succeeded in subjugating large parts of Iraq and Syria. She called the area where the terrorist regime of IS was established until the past year 'the caliphate'. This has been destroyed by some twenty countries and a series of ethnic or political militias such as those of Syrian Kurds.

The military intervention of Russia since September 2015 has also been decisive in the civil war in Syria.

A Jordanian newspaper reported Monday that a remainder of IS wants to regroup in the west of Iraq. A leader, Abu Yehia al-Iraqi, would be working there in Wadi al-Hawran, in the sparsely populated 'desert province' al-Anbar to the west of Baghdad.