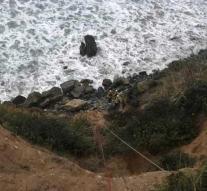 san francisco - An American woman who has been missing for a week has been found at the foot of a cliff in California.

On July 6, Angela Hernandez, a 23-year-old inhabitant from Portland, had to avoid an animal on the famous Big Sur road. As a result, she lost control over the wheel of her SUV and she crashed with a car and all of a cliff. Her car landed halfway into the sea. For seven days she kept alive with water that the woman with a radiator hose took from a brook. She was found by two hikers. The woman hurt her shoulder because of the crash. How it goes with her is not clear.

She was on her way to relatives in Lancaster, southern California.