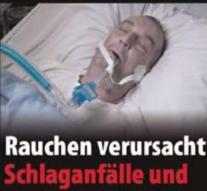 - A Belgian woman got the shock of her life when she recently bought a pack of cigarettes. The fearsome picture on the packet she recognized her husband, who had a stroke six years earlier deceased. Remarkably, a woman from Austria claims that it just comes to her husband.

Both families are outraged at the European Commission, which is in accordance with their unauthorized use of the photograph. The deaths make their families had nothing to do with smoking, they say.

The photo shows a man in a hospital on ventilators. The Belgian family Nizet tells Nieuwsblad it comes to their deceased father Joseph. However, no one knows how the photograph ended up in the Directorate General for Health and Food Safety of the European Commission, who provided the photo to the Belgian Ministry of Health.


In addition, it is not clear who the picture is actually taken. Nobody has made clear pictures when the man was in a coma in the hospital, the family says.

A month earlier claimed an Austrian widow on exactly the same picture that it is her deceased husband, Franz Wegerer. And that while her husband had never touched a cigarette, she told Austrian media. The woman took a lawyer in the hand and is planning to drag the European Commission to court.

The European Commission denied that it was Mr. Wegerer. It would involve a German who had indeed given permission to use his photo on tobacco. Austrian hospital where Wegerer died also denied that the photo had been taken in their hospital. That is because using other equipment than can be seen in the photo.


The claim of the Belgian family the European Commission has not responded yet.

As of May, there are also in the Netherlands in new packs of cigarettes and rolling tobacco horrifying photographs of diseases caused by smoking.