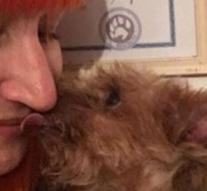 - For eight years, Wilhelmina Morgan Collagan (43) from Northern Ireland has been happily married... with her dog. Henry, an 8 year old Yorkshire Terrier, is always available for hugs, is loyal and always supports his boss and life partner.

For years, Wilhelmina was not very happy in love. When she read that there are people who marry online with their pet, she decided to do that too. And the lucky one was Henry, a friend's dog that she had adopted in 2008.

'I have experienced a tough period in my life since the marriage in 2009. I lost my job in a funeral company and since then I have been actively active as a freelance balsemer. It's not really a lucrative business. My house is still flooded, 'she explains in British media.

'Henry was my support and assertion through all this. He's so loyal, I call him 'Ri', that's Gaelic for King, because he's a king, my king. Usually it's good between us, but sometimes we are struggling. '