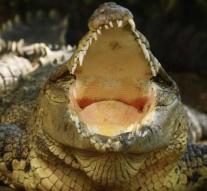 harare - One wedding is not the other: a woman is five days after her arm was bitten by a crocodile in the marriage boat stepped. Bride Zanele Ndlovu (27), in spite of the great tragedy, continued 'just' and married an engaged wedding with her fiancée Jamie Fox (25), writes Daily Mirror.

The bride lost her arm when she was attacked by the beast during a trip in an inflatable canoe on the Zambezi River in Zimbabwe. She was dragged into the water, but brought it alive by brave intervention by her future husband.

In the hospital, the arm had to be amputated after a long operation. Five days after the attack, the couple gave each other the yes in a small chapel at the hospital.