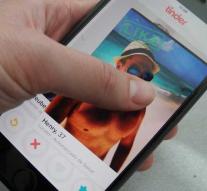 - Have you had two nice dates via Tinder, you can say your day against your unemployment benefit. That happened to a single mother of three children from New Zealand.

The woman anonymously told her story to radio station RNZ. She told the supervisor of WINZ, who is in New Zealand about the unemployment benefits, about two dates she had with a man she had gained through dating app Tinder.

She also said that she had both paid the dates. That while the woman had also offered to pay for herself.

That was wrong with the supervisor who decided to withdraw her unemployment benefit immediately. Because the man paid for the dates, the woman could count on an income, according to the regulator. And that is seen as a relationship at WINZ.

This put the woman in the assistance. She feels humiliated and stressed. 'How they talk to me, that's just very dirty. Now I have a benefit and they treat me like old dirt. '

The responsible ministry has now apologized. There would be a misunderstanding. Her benefit would not have been stopped because she had two dates but because the ministry had been told to live with someone, that they had a mortgage together and that they both had work. The woman would also have missed two appointments.

According to the woman, these claims are not correct. 'It seems like they are covering themselves. I am always available but I have not received any notice from them. '