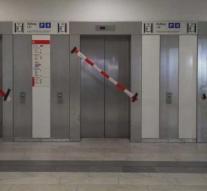 new york - A woman has been stuck all weekend in a lift in New York. The woman was discovered Monday morning and released by firefighters. She was taken to the hospital. How exactly with her...

No further information was published about the woman. It is also not clear whether she had a phone with her and how it could happen that she stayed unnoticed for so long. It would be a cleaning lady.

The woman was stuck since Friday night and has spent three nights and days in the elevator in the Upper East Side building.