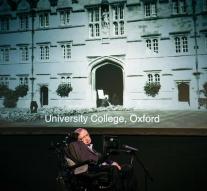 - The Spanish court has an American woman who threatened to murder the renowned British physicist Stephen Hawking sentenced to four months in prison. They may also not come close to Hawking, the judge decided according to the Spanish newspaper El Mundo.

The 41-year-old Jenny C. Hawking threatened several times by email with death. They traveled to a wheelchair-bound Brit chase to an astronomy festival on Tenerife and found that preparations for an assassination, the prosecution said. The US kept himself insisted that she is very fond of hawking and could never hurt a hair to him, the local newspaper writes La Opinión de Tenerife.