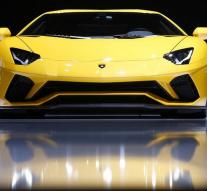 zaandam - A 28-year-old woman from Amsterdam in the night from Friday to Saturday in her Lamborghini held on the A8 motorway near Zaandam. They drove about 40 kilometers per hour and had already swinging by several times almost hit the guardrail. Also, whenever the brake lights went on and off.

The police, who had been warned by a truck, the woman gave a stop sign. A breath test showed that the woman had been drinking too much. She's lost her license.