Home / World / Woman has cockroach well over week in ear 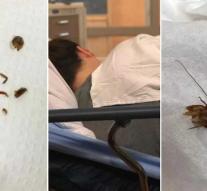 melbourne - Cockroaches are not very nice, let alone in and on your body. Katie Holley from Melbourne, Florida, had the fright of her life when she found out that one of these creatures had settled in her ear.

Katie woke up with a strange feeling in her left ear. 'I put my finger in my ear, but I did not feel like sitting. 'Disoriented and confused she walked to the bathroom to inspect her ear with a cotton swab. When they took it out of her ear, two legs were attached.

'When I realized that there was an insect in my ear I had a small nervous breakdown,' Katie tells Buzzfeed News. Katie felt the cockroach move in her ear. 'It did not hurt, but I constantly heard a buzzing sound. 'Her husband tried to remove the animal from her ear, but only got the other paws.

The whole animal was removed in the hospital, at least, she thought so. 'I heard for two minutes that the creature died, after the doctor sprayed a kind of anesthetic spray into my ear. '

To her great horror, nine days later, she still suffered from a blocked ear, after which the doctor removed a last part of the cockroach from her ear. The head.