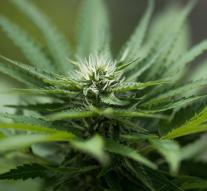 brussels - A woman from Brussels on Monday to the police stepped because her husband was found to have more than 30 kilos of drugs in the house. The forty-year man has been arrested, the prosecution announced in Brussels Wednesday.

The woman had discovered that her husband had something hidden in a suitcase in a closet in their bedroom. She decided to call the police when it appeared that it was drugs.

Agents found almost 4 kilos of cannabis resin, 27 kilos of marijuana and more than 2 grams of cocaine. They also found 750 euros and three mobile phones. The man came home during the search, as equal to the police.