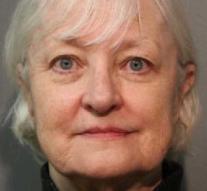 london - The 66-year-old Marilyn Hartman has flown ten times long distances without a ticket and without a passport.

The 'serial spine' as it is now called, went on short flights, but also on the Chicago-London route.

Last January 14, it succeeded again by slipping the heavy security of Chicago O'Hare. Marilyn then slept in the terminal one night to board a British Airways aircraft the next day.

No flight attendant asked questions about her presence without a valid boarding pass.

Only at the customs in London a bell rang. Although she refused that she had 'forgotten' her pass, she was immediately put back on the plane. She was arrested in the US.

The same thing happened before at airports in Illinois, Arizona, Hawaii, California and Florida.

As a punishment Marilyn must now wear an ankle strap. Last time, however, that did not help, because she would have flown from California to Chicago with the device on her leg.

The American must now be examined psychically by the judge, reports Het Nieuwsblad.

Media in America says that the woman is 'alienated' from her family and leads a wandering existence.