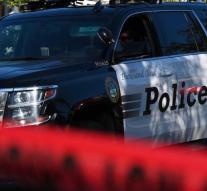 san francisco - A woman from Modesto in the US state of California has encountered a corpse when burying her pet. After putting the shovel in the ground a few times, she found the decomposing body in her garden.

According to local media, agents who had rushed to the garden confirmed that they are human remains of an adult. Investigators suspect that the body has only been there for a few months. The identity and the cause of death are investigated.