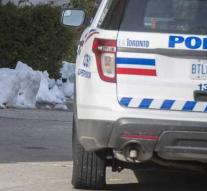 toronto - A Canadian woman was found dead Tuesday morning in a textile container in Toronto. The woman has been partially imprisoned in the container before she died.

Ambulance employees have tried to provide first aid, but that was no longer useful, writes CBC Toronto. According to a police spokesman, the victim did not die under suspicious circumstances; it looks like it was an accident.