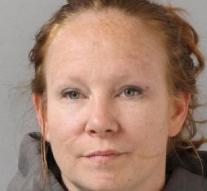 nashville - A 37-year-old American woman from Nashville, Tennessee, was arrested on Sunday because she had lied to the police. The woman panicked the emergency number because her husband would hit her face. Upon arrival it turned out that the fork had something else in the stalk.

The man told the police that his wife was angry because he did not want ice cream for her. This did not want the man to do because he was tired after a long day of work.

Then the woman admitted she had lied. She had hoped the police could calm her husband.

When the police wanted to arrest her, the woman first wanted to go to the bathroom for a second. Two minutes later a window opened and afterwards the agents heard a loud blow. The woman was taken out of the bathroom window and then fled.

Soon the woman could be arrested. Then she was transferred to the local prison.