Home / World / Woman awakes from coma after bullets in Bataclan 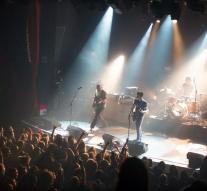 - The 31-year-old singer Laura Croix was present at the concert of the Eagles of Death Metal in Bataclan theater, when terrorists opened fire. Laura was hit by six Kalashnikov bullets, but survived the attack. She was kept in an artificial coma, but earlier this month awake. For the first time, she tells her story.


Her older brother Sébastien Croix told the Sunday Times that the first words of his sister when she woke up.,, She asked if first what had happened that night. '' He suggests Laura lot of questions. She still remembers well that terrorists 'Allahu Akbar' shouted before they started shooting. Laura has been in a coma since December 10, but could not talk directly.
Laura was hit in her brush and went into her abdomen. One of the six bullets got stuck between her heart and lungs. She broke her arm and hip and lost two fingers. In total, the singer was operated ten times.
NEW