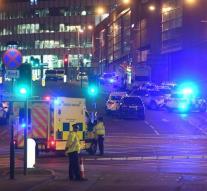 manchester - The British authorities arrested a sixth person for the suicide bombing in Manchester. 'A woman was arrested at an address related to the investigation,' reported the police in a statement.

The police entered Wednesday in northern Manchester. 'These searches are related to the terrible attack on Manchester Arena,' said the police. It is still unclear where exactly the woman is suspected.