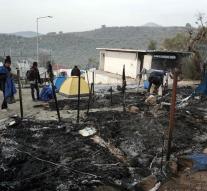 athens - A woman and a child were killed by fire in a refugee camp on the Greek island of Lesbos. Another woman and another child suffered severe burns. Other applicants were slightly injured. Which reported both Greek media as the Dutch Refugee Foundation Boot. A medical team of the organization has provided onsite assistance.

According Boat Refugee Foundation is a baby died. The Greek newspaper Kathimerini reported with a blow to the arm that the victims were a 60-year-old Iraqi Kurdish woman and her 5-year-old grandchild.

The rescuers saw their medical unit at Camp Moriah in flames. According Boat Refugee Foundation started the drama with an exploding gas cylinder in one of the tents. Then created a chaotic situation. Kathimerini reported that included ten wounded in a local hospital. The two seriously injured were flown to Athens.