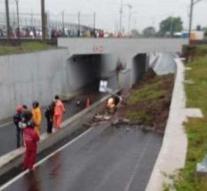 jakarta - A drama at Jakarta airport, where a tunnel wall collapsed due to heavy rainfall and collapsed on top of a passing car with two passengers. The car was completely buried under the mud. One of the passengers did not survive the accident. The other occupant was released after a rescue of no less than 13 hours.

Both women were taken alive from the car wreck. One of them later died in the hospital. They were on their way to work at airline Garuda at the important Indonesian airport.

The road where the accident occurred was opened at the beginning of this year. The authorities will conduct an investigation.